First Agenda of its Kind to Address Policing in Virginia

This Monday, Aug. 3rd at a virtual press conference, The Virginia Coalition for Transforming Policing announced the “Re-imagine Police Package,” a sweeping and comprehensive plan for police reform. This much-anticipated project comes in the wake of Black Lives Matter protests against police brutality, and is the result of multiple regional town halls involving hundreds of Virginians across the Commonwealth. The Virginia Coalition for Transforming Policing is a volunteer-based organization that combines the collective efforts of organizations across Virginia to find solutions to the decades-old problem of over-policing in Black and Brown communities. The press conference was held via Zoom and featured coalition leaders discussing this community-based plan of action. Lawmakers have committed to addressing police reform during the Aug. 18 special session, and the Re-imagine Police Package is a broad, community-based list of policies for the General Assembly to pass in order to protect Black and Brown lives.

Steering Committee Member, Jeffrey Caesar commented that “We [Black Americans] have the opportunity to do something that’s never been done before,  we can stand in our truth, be willing to learn, and to move forward to a brighter tomorrow.” The Black Lives Matter movement has gained significant support and created an opportunity to dismantle a small yet significant piece of Institutional Racism.

The Re-Imagine Police Package is the first step in producing a safer,  just, and stronger Commonwealth.

Princess Blanding, the sister of Marcus-David Peters who was killed two years ago by police, said, “We the people will not back down. We will continue to unite, organize, and fight this racist system until legislative changes are made that not only say that Black Lives Matter, but to show that Black Liberation Matters.” 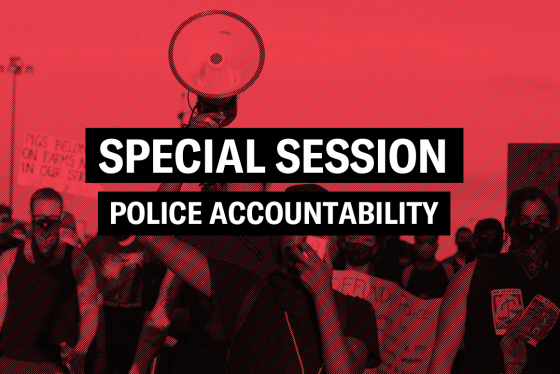