The ACLU of Virginia sent Governor Ralph Northam a letter asking him to take action on pending legislation that would protect or expand the right to vote.

The governor can protect the right to vote of Virginians by vetoing SB 1038 (Peake) that seeks to require general registrars to verify that the name, date of birth, and social security number provided by an applicant on the voter registration application match the information on file in the Social Security Administration database. And, he can expand the right to vote in Virginia by recommending amendments in the nature of a substitute to both HB 2790 (Rush) and SB 1026 (Spruill) that would mirror the language of HB 1641 (Herring) and SB 1026 (Spruill) as introduced which were a part of your legislative package and endorsed by the Virginia Legislative Black Caucus.

"This bill has the potential to disenfranchise Virginia voters on the basis of typos or other minor discrepancies between information on their voter registration form and information about them in government databases," the ACLU of Virginia wrote in the letter concerning SB 1038. "This bill would require 133 individual general registrars to conduct additional, duplicative and error-prone matching procedures of their own, on an annual basis, and shuttle any voters whose information does not match to the onerous provisional balloting process, which could lead to longer lines, require additional trips to the local electoral board, and result in fewer ballots being counted."

On HB 2790 and SB 1026, the ACLU of Virginia believes that as passed, these two bills grant a seven-day voting privilege ticket only to those voters who jobs, locations and circumstances permit them to appear at a registrar’s office in person to vote in the last week before an election. "These privileged voters, but not those who can’t arrange to vote in person in the last week before the election or who must vote absentee by mail, may vote absentee without having to give an excuse," stated in the letter. "Voters who have to vote absentee in person outside the seven-day privilege ticket window or who must vote by mail continue to be required to give an excuse, to divulge private information to the registrar that is made a public record, and to do so under penalty as a felon if they are not truthful about the excuse they give."

The ACLU of Virginia called on the governor to amend HB 2790 and SB 1026 and offer the General Assembly another opportunity to expand the right to vote by passing true no-excuse absentee voting for all voters. 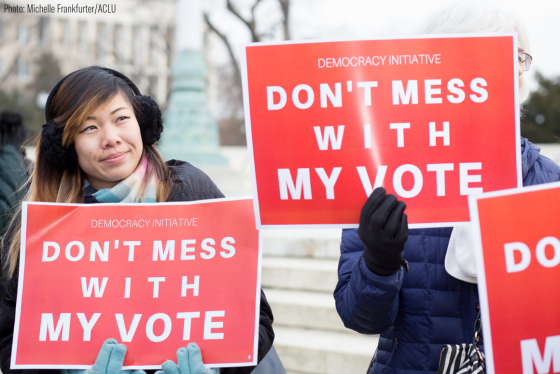 Here's Why It Is Important to Remove the Witness Requirement for...

League of Women Voters of Virginia v. Virginia State Board of...

Voting during the COVID-19 Pandemic

ACLU of Virginia Offers Recommendations on Voting During COVID-19...