Why We Use Inclusive Language to Talk About Abortion

Women aren’t the only people impacted by the fall of Roe v. Wade.

Last week, the U.S. Supreme Court overturned Roe v. Wade in a shameful ruling that decimated access to abortion. Adding insult to injury, this unprecedented assault on our fundamental rights and bodily autonomy took place during Pride month. Abortion access should concern everyone, and this ruling directly impacts everyone who can become pregnant. That’s why so many LGBTQ+ people are deeply invested in the fight for abortion access.

There is, of course, the obvious answer: women. Cisgender women have abortions more than any other group of people. There is plenty of data to back this up. Abortion among women who can become pregnant is extremely common and nearly one in four women will have an abortion in their lifetime. The vast majority of data available about abortions and abortion access surveys women. That data tells us that the average person who gets an abortion is a woman of color who is already a mother and who lives at or below the federal poverty level.

The more expansive and more accurate answer is anyone who can become pregnant needs to be able to get an abortion if they need or want one, including many cisgender women, some non-binary people, some intersex people, some Two Spirit people, and some trans men.

Yes, people other than women need access to abortion care.

As a bisexual transgender non-binary person, I can become pregnant. I am not a woman — and yet, I could need access to abortion care. I also know that I never want to be pregnant. For me, access to abortion would be a matter of lifesaving health care. When trans people articulate the need for access to abortion services, or that we have accessed abortion care in the past, these experiences are often dismissed by those who want to deny that more people than just cisgender women need abortion. But we’re here, we’ve been here, and we’re not going anywhere.

The fight for abortion rights and LGBTQ+ rights go hand in hand because they are both ultimately about protecting our bodily autonomy. But they’re also intertwined because lesbians, bisexuals, trans people, queer people and yes, some trans gay men, can experience pregnancy and deserve control over if, when, and how we become pregnant, and whether or not we stay pregnant. 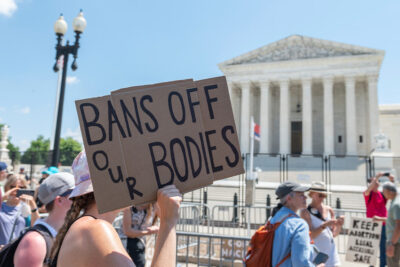 Yes, men and other people who can’t become pregnant can, and should, care about abortion access.

When conversations about abortion reduce it to a “women’s issue” or an issue only for people who can carry pregnancies, we exclude a wide swath of people.

Protest signs and messages often use the framing of “no uterus, no opinion,” ignoring that there are many cisgender women who have and have not carried pregnancies who have had hysterectomies and no longer have a uterus. Hysterectomies are, in fact, the second most common surgery for cisgender women.

Centering who gets to have opinions about abortion around whether or not people are currently able to become pregnant excludes people from our understanding of abortion rights, rather than expanding it.

Restrictions on trans rights and abortion rights come from the same playbook.

In the same breath, we must acknowledge that the systems and structures involved in banning abortion are focused on restricting the rights of women and the rights of trans people. Over 300 anti-trans and anti-LGBTQ bills have been proposed in state legislatures just in 2022, and over 20 new anti-trans bills have become law over the past three years. In the same period of time, 541 of restrictions aimed at pushing abortion out of reach have been proposed and 38 have become law.

Nearly all of these bills politicize our bodily autonomy and access to essential, life-saving health care. Trans affirming health care and abortion are both already hugely expensive medical procedures, often not covered by health insurance. Both are often prohibited from being covered by insurance under state laws.

For trans people, laws in some states prohibit access to gender affirming care, particularly for youth, or worse, criminalize parents who allow their children to access this care. For people who need abortion care, there are legal restrictions that prohibit insurance coverage, enforce long waiting periods for time-sensitive care, and other medically unnecessary barriers.

Any way you slice it, diving into the politics of both abortion access and trans rights requries people who may need an abortion and trans people to be ready to debate why we need access safe, common medical procedures that will save our lives. It is, quite frankly, exhausting to repeatedly ask for acknowledgment of a shared experience, especially one that can be so medically life-altering.

Our bodies are our own. Our health care choices are ours to make. And abortion and gender-affirming care are our right.

Fighting for my Nonbinary Child in Hanover County