When the State Kills Someone in Our Name, the Entire Process Should Be Open to the Public.

The Richmond Times-Dispatch (RT-D), the Associated Press (AP), and several other news organizations filed a lawsuit in late September against the Virginia Department of Corrections (VDOC) seeking to remove one aspect of secrecy around the death penalty in Virginia.

The ACLU of Virginia opposes the death penalty and seeks its abolition in our Commonwealth. There are many reasons for this, including that there is a wide racial disparity in its application, innocent people are sometimes convicted of crimes they didn’t commit, and there is no way to kill someone humanely.

While its use is dwindling, Virginia is second only to Texas in the number of people put to death for capital crimes since the U.S. Supreme Court allowed executions to resume in 1976. There are currently three people on death row in Virginia.

As long as the statute remains in effect, the ACLU of Virginia supports the American Bar Association’s Execution Transparency Resolution, which asserts that all aspects of the process of killing someone in the name of the state should be open to the public.

In Virginia, however, there are three aspects of the process that are shrouded in objectionable secrecy.

One is codified in the law, allowing the Virginia Department of Corrections to work in secret with compounding pharmacies to obtain drugs for use in lethal injections.

The second relates to the VDOC’s written protocols for carrying out the death penalty, an 18-page document ominously titled the “Execution Manual” but which has only been released publicly with heavy redactions.

The third issue, which was raised in the media lawsuit, relates to the ability of witnesses – required by law to observe every execution on behalf of the public – to see the whole procedure. This first became an issue following the execution of Ricky Gray in January 2017.

Prior to Mr. Gray’s execution, the protocols required that a curtain be pulled between witnesses and the person about to be killed after that person was brought into the execution chamber, but before IVs were set. The curtain was opened after IVs were set and following two other activities that are redacted in the manual.

Mr. Gray’s execution apparently didn’t go as planned, however, and he lay out of view of witnesses – law enforcement officials, Mr. Gray’s lawyer, and representatives of the news media – for 33 minutes while medical technicians attempted to place IVs in his arm. We’ll never know what happened during that half-hour, whether he was in severe pain, struggling in panic, or even if he bled out on the table.

After that event, the ACLU of Virginia called on Gov. McAuliffe to halt all executions in Virginia until all aspects of secrecy around the death penalty are eliminated in keeping with the American Bar Association’s Execution Transparency Resolution. VDOC’s response? They updated the protocol so that now the curtain is pulled before the person is even brought into the execution chamber.

There are a lot of problems with this, mainly that this is the public’s only opportunity to see – through the eyes of citizens and pool media representatives – the condition of the person prior to the state killing them. It’s the single chance to know if that person is malnourished, has been abused, is drugged, or actually even whether it is the right person.

Given the recent lawsuit, the ACLU of Virginia is renewing its call upon Gov. Ralph Northam, himself a physician, to undo all of the secrecy around the death penalty. We are recirculating a long-standing petition, which as of this writing has more than 1,150 signatures, and will present it to the governor soon. The only reason for keeping any secrets around the death penalty is to prevent the public from knowing how gruesome and torturous it really is.

Gov. Northam: Stop Executions in Virginia from Being Carried Out in Secrecy 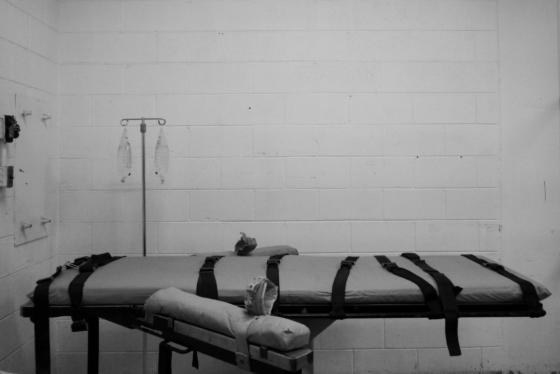 A Confederate Portrait, Racial Bias, and the Death Penalty in Virginia

ACLU-VA Tells Governor to Stop All Executions and Update Protocols...

Our Greatest Hits in Under Two Minutes