A Confederate Portrait, Racial Bias, and the Death Penalty in Virginia

By Jeffery Robinson, ACLU Deputy Legal Director and Director of the Trone Center for Justice and Equality

In Louisa County, Virginia, a Black man stands trial for his life. When he looks around to see who is presiding over his trial he will see the picture of another man besides the judge starting down at him from above— Confederate Gen. Robert E. Lee.

This isn’t the post-war South of the late 19th century or even the first six decades or so of the 20th century. This is Virginia in 2018. And this is the court where the defendant, Darcel Murphy, is expected to receive justice under the portrait of a man who fought to keep his ancestors enslaved. This week, Murphy’s lawyers filed a motion asking for the trial to be held in a courtroom free of Confederate symbols, memorials, and iconography.

Although it should not need to be stated, a man whose picture is etched on Stone Mountain, the Mount Rushmore of white supremacy, should not be on the wall in a court of law in America. The fact that the portrait is speaks volumes about how America has historically and continues to minimize its racist legacy. 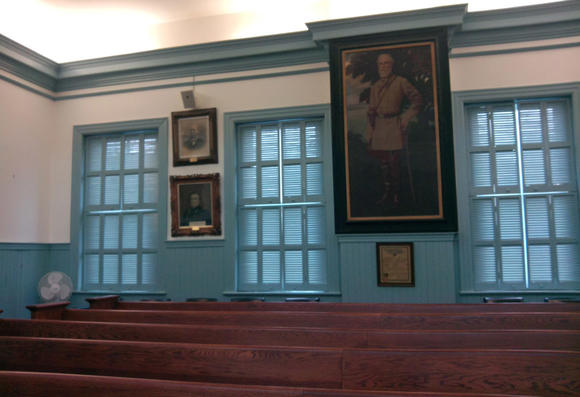 The penalty phase of any capital case involves an examination of humanity –the life story of the defendant – when his lawyers will argue why he should be spared the ultimate punishment. A symbol representing belief in the inhumanity of Blacks has no place in any courtroom, especially not a southern courtroom where the guilt or innocence, and then potentially the life or death, of a Black man will be decided. Make no mistake, Lee’s portrait stands for the inhumanity of Black people.

Our unwillingness to confront an ugly truth about Lee and our shared history reinforces the racism of the past through silent and tacit acceptance. When someone tries to skew the story of enslaving Black Americans, you can be certain they are not promoting truth and racial justice. Basically, some people need a history lesson to open their eyes.

A primary example of such a dishonest treatment of our history occurred a year ago this month, when Ret. Gen. John Kelly appeared on the Fox News show, “The Ingraham Angle,” and tried to justify General Lee’s leading the fight for the Confederacy as something other than defending the right of white Americans to own Black people as property. Kelly said:

Robert E. Lee was an honorable man.  He was a man that gave up his country to fight for his state, which 150 years ago was more important than country…The lack of an ability to compromise led to the Civil War and men and women of good faith on both sides made their stand where their conscience had them make their stand.

It sounds noble, even honorable. But it’s not. It is racist and false and the devilish idea it promotes is revealed in the details that put the lie to Kelly’s claims. And, ironically, the strongest rebuttals to Kelly’s claims about Gen. Lee’s motivations for fighting are the views expressed by the very people who were enslaving Black people at the time Lee made his decision.

If Lee gave up his country to follow his state, Virginia’s secession statement leaves no doubt about why the state was leaving the Union. According to the delegates at the Richmond Convention, the federal government had violated the Constitution, “not only to the injury of the people of Virginia, but to the oppression of the Southern slaveholding States.”

The injury and oppression concerning Virginians was the loss or profit and property. W. E. B. Du Bois speaks from the past and again puts the truth to Kelly’s lie, saying:

People do not go to war for abstract theories of government. They fight for property and privilege and that was what Virginia fought for in the Civil War. And Lee followed Virginia. He followed Virginia not because he particularly loved slavery (although he certainly did not hate it), but because he did not have the moral courage to stand against his family and his clan.

Kelly’s claim that a failure to compromise led to civil war fails to address the question of who was failing to compromise and about what. Surely Kelly was not suggesting that Black people should have “compromised” and agreed to remain enslaved until freedom was more convenient for white people. And surely Kelly did not forget about the three-fifths compromise in the Constitution, the 1820 Missouri Compromise, the 1850 Missouri Compromise, and the Kansas Nebraska Act, which all demonstrated America’s willingness to compromise about enslaving people to keep the institution of slavery alive and well.

John C. Calhoun — two-time Vice President, senator, and representative from South Carolina — knew the importance of enslaving Blacks and stated it clearly in 1837, almost 25 years before the Civil War. He said, “Abolition and the Union cannot co-exist. … We of the South will not, cannot, surrender our institutions. To maintain the existing relations between the two races … is indispensable to the peace and happiness of both.  It cannot be subverted without drenching the country in blood.”

Lee knew what he was fighting for.  Confederate Vice President Alexander H. Stephens was clear in his Cornerstone speech: “Our new government is founded upon… the great truth that the negro is not equal to the white man; that slavery subordination to the superior race is his natural and normal condition.” And Confederate Army Lt. Gen. Nathan Bedford Forrest, a founder or early member of the KKK simply said, “If we ain't fightin' to keep slavery, then what the hell are we fightin' for?”

It is ridiculous to seek to excuse Robert Lee… Either he knew what slavery meant when he helped maim and murder thousands in its defense, or he did not. If he did not he was a fool. If he did, Robert Lee was a traitor and a rebel – not just to his country, but to humanity and humanity’s God.

There are places for a portrait of Confederate general and proponent of slavery Robert E. Lee to be displayed. A court of law where the guilt and then potentially the humanity of a Black man will be weighed, and where a decision about his living and dying will be made, is not one of them. The portrait must come down.

When the State Kills Someone in Our Name, the Entire Process Should...

ACLU-VA Tells Governor to Stop All Executions and Update Protocols...

Our Greatest Hits in Under Two Minutes